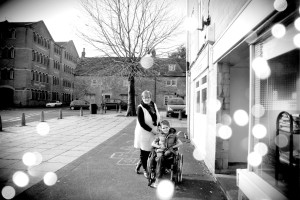 “For this issue I have invented the first Humans of Frome Award – Mother of the Year and this year the award goes to Dawn Chapman,” says Ciara.

“Dawn is a busy production manager at a local engineering company, a job which she loves and finds professionally fulfilling, she is also the kind of mother who is an inspiration to us all.”

“I think of these words spoken by Picasso when I chat with Dillon Chapman about his plans for the future and his forthcoming GCSE options. At the age of 13 he is definite that he wants to study business and plans to set up a business making specialised wheelchairs and developing bespoke properties to accommodate people with mobility difficulties. It’s extraordinary that any young lad of 13 has such a fully formed plan, but this guy is no ordinary chap. Already, he has raised an astounding £89,000 through presentations and talks that he gives on behalf of the likes of the ‘Make A Wish Foundation’’ and other charities.

“Dillon’s mum Dawn, listens in to our conversation with a smile, her eyes twinkling with an enormous sense of love and pride in her teenage son. She interjects that Dillon started giving talks when he was just seven years old when they attended a fundraising night in a prestigious London Hotel. Imagine her pride when her young seven year-old firecracker of a son volunteered himself to stand on the stage and speak to the hundreds of well-heeled guests. He blew them away that night with his insightful and eloquent speech and the rest as they say is history.

“The Chapman family history is a rich and complex one; you don’t get to the age of 13 and have such fully formed ideas on the future without some real life experiences of your own.

“Some readers may already be familiar with Dillon’s story, he is a well known and liked face about town and even further afield these days since the BBC documentary ‘The Boy Who Wants His Leg Cut Off’ aired last year. Dillon suffers from an aggressive form of neurofibromatosis, a disease that causes tumours to form in his nervous system. His leg had grown out of proportion to his tiny frame and following 11 years of agonising pain, a long list of operations, interventions and mobility issues, this mature 11 year old decided to fight for amputation. The documentary follows the Chapman family on their journey to battle the establishment to allow this unprecedented amputation to be carried out.

“I’m delighted to say that the family won their battle and Dillon’s left leg was amputated last year, heralding a vastly improved new lease of life for this brave young man.

“Dawn laughs and explains that he missed only two days of school (as the operation took place over a school break). When she phoned the school to inform them that he would be coming back sooner than expected, they, of course were surprised but not overly as everyone who knows this family are always prepared to be amazed.

“Dawn says that Dillon’s words at the time were, ‘I’ve not had brain surgery, I’ve just had my leg off.’ They laugh together, something that they do frequently during our mid morning meeting at the barbers where Dillon is getting a very smart short back and sides.

“I watched the documentary with great interest, also following progress on Dawn’s Facebook page where she replied to every one of the well-wishers who had taken the time to get in touch, and one thing was becoming blatantly obvious….this powerhouse of a woman, this rock of a mother is someone with enormous emotional intelligence. I was curious to speak with her, and to understand how someone remains so strong through the weight of such enormous challenges.

“Dawn tells me that minutes after Dillon’s birth she turned to Mark her husband and told him that she was scared. She was scared of the enormity of motherhood, frightened of making the wrong choices, and fully aware that from that moment onward they were responsible for this little bundle and who he would go on to be in the world. When they discovered the magnitude of Dillon’s NF she says that they turned to one another and said, ‘Bring it on.’ She adds that they made a pact to never lie to their son, to involve him in everything, to help him to understand his condition and to support him in making his own decisions as he grew up. It took a moment for me to consider these wise, well informed decisions that Dawn and Mark made so long ago, how did two new parents know how to deal with the weight of their new and unexpected life-changing situation.

“Where does such a level of emotional intelligence come from? Dawn smiles when I ask and she sits back on the white leather sofa, in the warm barbershop salon on Selwood Road and with the spring sun lighting her soft red hair like a halo around her she grins and says, ‘sometimes you have to hit rock bottom to really know who you are.’

“She goes on to reveal that as a young girl, the 7th child in seven years, she was faced with many challenges but that she was very blessed with a family who had the ability to really love. Dawn lost a sister when she was 11 years old, her sister had physical disabilities to contend with.

“Dawn talks fondly of how her mother guided her through some of the unkind things that people might say when they were out and about in town. Telling the tale of how her sister asked why people stared at her so much, she remembers with fondness her mother’s reply, ‘Sure you are so beautiful they had to look at you twice.’

“Her sister died at home one day which was a huge shock to the whole family and a loss that they never really quite recovered from. Five years later, her beloved father died and her 45 year-old widowed mother continued with the task of guiding her large family through those difficult years. Sounds as though, there’s another exceptional mother in this story to celebrate.

“I walked away from our meeting with my head held high, enjoying the warmth of the spring sunshine on my face and the radiating warmth in my heart. A mere hour in the company of this woman and her ‘chip off the old block’ of a son and I feel like I can take on the world.

“The legacy of a brief morning interlude is an overwhelming feeling of happiness and the reminder that life is too short, you should love every minute and to remember you are blessed for however long you have someone in your life, so be sure to enjoy them. Live every minute as though its your last and you won’t go wrong.

“Happy Mother’s Day Dawn, Dillon is a credit to you.”