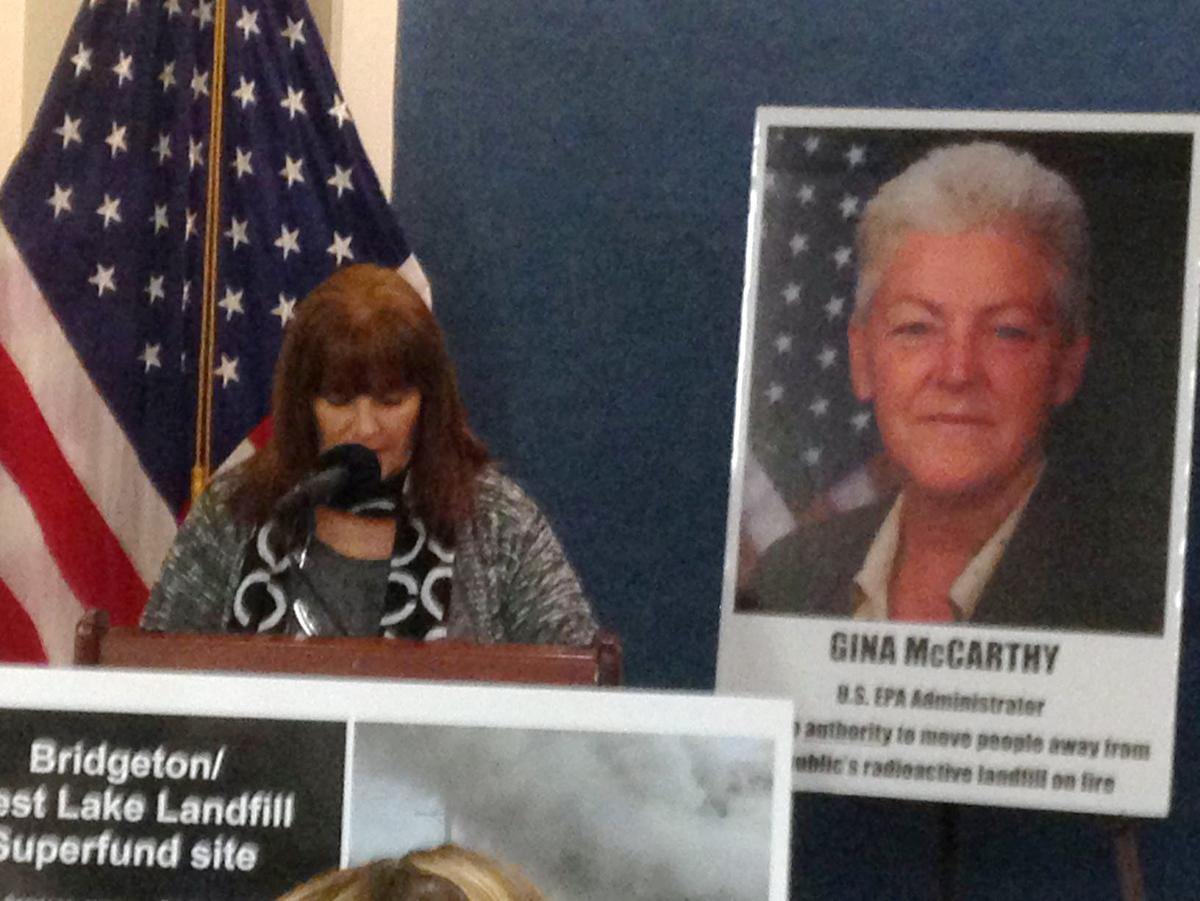 [fusion_builder_container hundred_percent=”yes” overflow=”visible”][fusion_builder_row][fusion_builder_column type=”1_1″ background_position=”left top” background_color=”” border_size=”” border_color=”” border_style=”solid” spacing=”yes” background_image=”” background_repeat=”no-repeat” padding=”” margin_top=”0px” margin_bottom=”0px” class=”” id=”” animation_type=”” animation_speed=”0.3″ animation_direction=”left” hide_on_mobile=”no” center_content=”no” min_height=”none”] In this Feb. 9, 2016 photo, JUST MOMS co-creator Karen Nickel criticizes what she says was inaction of EPA administrator Gina McCarthy, pictured over her left shoulder, in the West Lake/Bridgeton landfill fire and nuclear waste controversy. The group joined with activists from the Flint, Mich., water crisis, for a press conference at the National Press Club. Chuck Raasch, of the St. Louis Post-Dispatch
WASHINGTON • Activists around the West Lake Landfill controversy have joined with those from the Flint, Mich., water crisis to put pressure on the federal Environmental Protection Agency to respond more forcefully to both.
JUST MOMS stl, a group organized to force the EPA to reduce the threat of radioactive waste at West Lake Landfill, help families within a mile relocate, and assure property values for those within five miles, held a joint press conference with Flint activists here Tuesday.
The issue of whether, and how, to clean up waste from the federal government’s nuclear weapons programs at West Lake has been made more critical by an underground fire at the adjacent Bridgeton Landfill.
About a dozen representatives of the Maryland Heights-area group said they will also picket EPAheadquarters Wednesday, protesting what they say has been EPA administrator Gina McCarthy’s unwillingness to meet with them, or to act more urgently on their behalf to address exposure to cancer-causing agents and other health hazards from the sites.
That standoff with the EPA is not new, and McCarthy has previously refused to meet with representatives. What is new is the linkage between West Lake and Flint, where the EPA and other local, state and federal authorities have been under fire for allowing lead exposure in water there to persist, endangering the health of families in that community.
Flint activists say recalcitrance and stonewalling from government agencies, and especially the EPA, have left residents exposed to cancer-causing lead and other health problems.
“Their community has suffered through silence from the EPA just like we are here in Bridgeton,” said JUST MOMS stl co-founder Karen Nickel at Tuesday’s press conference. “I think it is time for the moms of Flint and the moms of St. Louis to make a pact and stay strong and fight for our children.”
Melissa Mays, a founder of a Flint group called Water You Fighting For, said, “I can only imagine the fear and anger that the Bridgeton families feel, because we feel it for you. We are right here with you and we are going through the same thing. To this day, no one is helping us.”
The two women said their groups planned to share share health and other information, and continue to join forces to pressure the EPA.
A special counsel appointed by the state of Michigan said Tuesday that civil and criminal charges were possible, including manslaughter, in Flint. The federal Department of Justice is also looking into that crisis.

Sens. Roy Blunt, R-Mo., and Claire McCaskill, D-Mo; and Reps. Ann Wagner, R-Ballwin, and William Lacy Clay, D-St. Louis, last May wrote McCarthy asking that she meet with the JUST MOMS group. But Nickel said they got no response. She said the agency was flooded this past week with about 1,000 calls from St. Louis area callers, but got no response in another request for a meeting with McCarthy.
A spokesman for the EPA pointed to efforts the agency said it is doing to confront both problems. A spokesman highlighted EPA Regional Administrator Mark Hague’s Jan., 11 report on what the agency did in 2015 at West Lake.
“We’ve completed ﬁeld investigations necessary to further deﬁne the extent and location of he radio-logical materials at the site, which is a critical step to move us toward proposing a ﬁnal remedy by the end of 2016,” Hague said. “We also recently announced our decision for the installation of an in-ground, physical isolation barrier on site along with other engineering controls.”
Of Flint, EPA spokesman Curtis Carey said the agency’s top priority in ‘Flint “is the safety of residents. The agency is part of a larger, on-the-ground, federal response focused on developing short- and long-term solutions to the crisis. ”
Clay, Wagner, Blunt and McCaskill have also sponsored a bill that would transfer authority over the landfill from EPA to the U.S. Army Corps of Engineers. It has passed the Senate, but not yet the House. Members of the group were expected to meet with both Wagner and Clay, the two members of Congress’s spokespersons said.
In addition, Missouri Attorney General Chris Koster wrote Clay and Wagner on Tuesday saying he supported their bill, charging that “the EPA has time and again made promises but failed to deliver results.”
But landfill owner Republic Services warned that the transfer could delay a cleanup the EPA has promised to have in place by the end of the year and could cost taxpayers more money.
Republic spokesman Russ Knocke called the press conference a “stunt” that, coupled with the authority transfer bill, would prevent the EPA from being “allowed to finish its work, quickly.”
A Wagner aide said that under the bill pushed by the Missouri delegation, cleanup costs would still be on Republic even if federal control  shifted to the Corps. Missouri’s congressional delegation is pushing for the change because the EPA “has clearly dragged its feet on this issue,” said Wagner’s spokesperson Meghan Burris.

By Sharon Franklin. Emily Beament published an article on January 16, 2023, on The Ecologist, a news and analysis website that focuses on environmental, social

8 Strategies to Grow Your Social Engagement

By Gregory Kolen II. When measuring the effectiveness of your social media messaging, engagement through actions such as liking, sharing, and responding indicate a potential